We want to alert you to a recent change in the law that affects Pell Grant awards starting with the 2012-2013 award year and beyond. This change limits the total number of years a student may receive a Pell Grant to the equivalent of six years. Since the maximum amount of Pell Grant funding a student can receive each year is equal to 100%, the six year equivalent is 600%.

How is my Pell Grant Lifetime Eligibility Used calculated?

The maximum amount of Pell Grant funding you can receive is calculated for an "award year." An award year is a period from July 1 of one calendar year to June 30 of the next calendar year. Your "scheduled award" is partially determined by using your expected family contribution (EFC) that is calculated from the information you (and your family) provided when you filed your FAFSA. Your scheduled award is the maximum amount you would be able to receive for the award year if you were enrolled full-time for the full school year. Your scheduled award represents 100% of your Pell Grant eligibility for that award year.

The Department of Education keeps track of your LEU by adding together the percentages of your Pell Grant scheduled awards that you received for each award year. The table below shows examples of the LEUs of three students who received differing amounts of their scheduled awards over a four year period 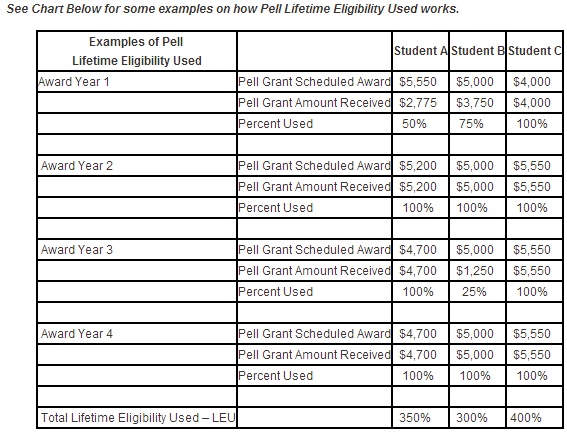 Note:  From 2009-10 through 2010-11, it was possible for a student to receive up to two scheduled awards in a year. So some students will have a "percent used" of up to 200% for one or more of those years. Of course, if a student's LEU equals or exceeds 600%, the student may no longer receive Pell Grant funding. Similarly, a student whose LEU is greater than 500% but less than 600%, while eligible for a Pell Grant for the next award year, will not be able to receive a full scheduled award.

How can I see my Lifetime Eligibility Used (LEU) percentage?

In mid-July 2012, you will be able to log on to the National Student Loan Data System (NSLDS) Student Access Web site using your Federal Student Aid PIN and view your LEU. The LEU will be found on the Financial Aid Review page.